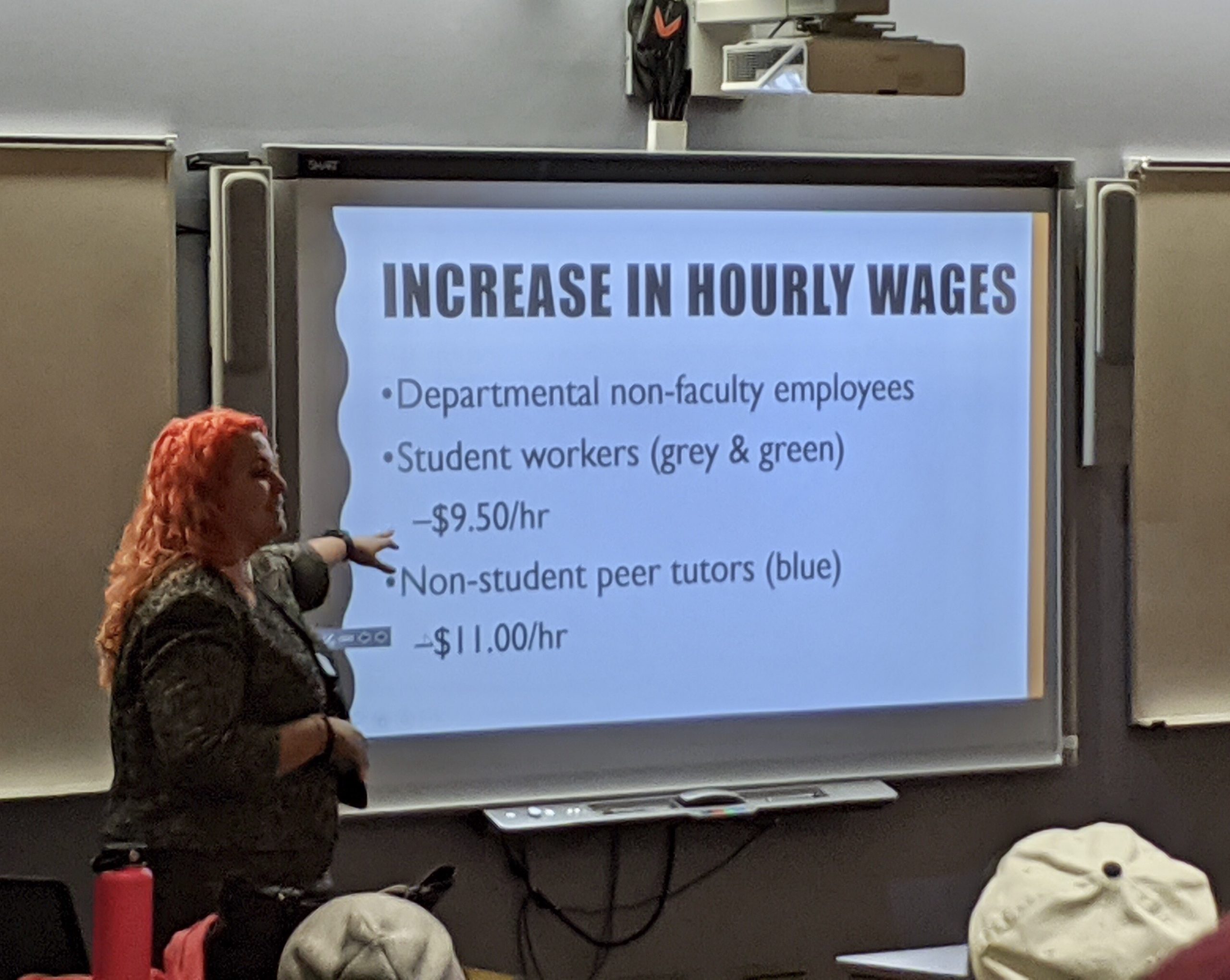 The start of the spring semester held a pleasant surprise for student workers: a campus-wide pay increase of $2.00. This pulls the previous campus work-study standard of $7.50 an hour up to $9.50, a significant improvement from what had been only a quarter above the federal minimum wage.

As a result, the campus seems even peppier than usual for the spring. Students described being even more excited than usual to return to their jobs or to take on new projects with the college.

“A pay increase for work studies shows that the effort put in by students is recognized and respected,” one student told me. “It provides an incentive for growth.”

For many teachers and department heads, this feels like a breakthrough. Some confessed that they have been pressing for a work-study pay raise for years with little headway, frustrating departments whose workers were “indispensable and highly skilled,” but seemingly underappreciated.

Over winter break the dam finally broke, and after a lot of behind-the-scenes campaigning and discussions during professional development meetings, their determination won the day. Amounting to almost a 27% raise, the pay increase will be immeasurably helpful for student workers and is worth the celebration.

However, the road shouldn’t end here. While $9.50 an hour is a great improvement, it still hasn’t approached the $12.64 that UCLA calculates to be a living wage in Philadelphia, or measure up to the many high-profile commitments made by companies like Starbucks or Amazon to pay their least-earning employees more over the coming years. To ensure wages do not stagnate again, some suggest our community college commit to a long-term plan to get work-study wages to where they need to be.

Conversations about what fair pay would look like have been playing out in all parts of the country and at all levels in government in the last few years. This last May in the 2019 primary vote, a ballot question in our city asked if the people approve lobbying the state capital to allow Philadelphia to increase its own minimum wage to $15, with the vote going to “yes” by a staggering 81%.

The discussion has also been one of the captivating factors in the 2020 presidential election. According to Politico, of the twelve remaining Democratic presidential candidates, eight support raising the federal minimum to $15, with the remaining undecided or suggesting alternatives. All five of the highest polling candidates—Biden, Sanders, Warren, Buttigieg, and Bloomberg—are included in those eight. This is where the conversation is going on a national stage, and CCP should be aware of this cultural shift.

This is all great news for increasing minimum wage on a large scale, but it does beg the question—if all of this is happening on the city, state, and federal levels, why should the college work to increase wages on their own? Wouldn’t it be easier to wait for the change to come through those avenues, and then the college can adapt after the fact?

The first and most pressing answer is that the college can wait, but student workers’ lives would be that much harder until the laws change. According to the action guides from the Office of the Mayor on phila.gov, the minimum wage rate for our state and for the federal government has not increased since 2009, while the cost of living since then has risen 13%. Waiting for an election and for new government policies would place that burden on student workers.

This also does not address the fact that larger governmental changes might take many years to materialize, or they may not even come at all. If politicians that are against raising the minimum wage continue to be elected into office, progress may never be made, or short-term victories could be undone. This has never been more clear in the case of the federal government, where the current president and his political supporters have been doing everything in their power to undo environmental protections, deregulate the financial sector, and cripple Medicare and Medicaid. The larger the institution, the harder it is to make permanent progress.

That’s what makes the Community College of Philadelphia so special. It was founded specifically to improve the lives and broaden the horizons of students from disenfranchised communities. As a smaller part of our city, it has the potential to react to the needs of its students more quickly than higher levels of government, and providing more equitable wages to its work-study employees would foster greater social mobility. Isn’t that what college is about?

The administrators’ relationship with students and faculty have been tense since the high-stakes union dispute last spring, but the wage increase for student workers feels for many like a breath of fresh air. For the teachers, department heads and students who pushed for progress, the administration showing that they were listening has made for a welcome revelation.