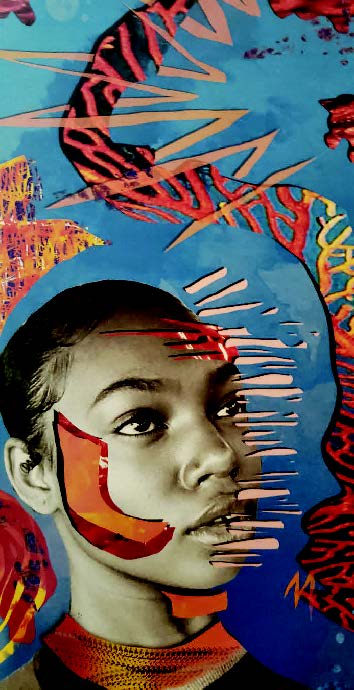 Clean your brushes and dip them in paint! The Student Government Association (SGA) will hold monthly art shows in Student Life’s lobby. These showcases will feature visual art, from paintings to sketches to photography, and hopefully in the future will be able to add literature, music, performance art, and various forms of art from around the college, but as of now, it will stick to canvases.

Jasmine Rozario, vice president of SGA and fashion columnist for the Vanguard, and self-proclaimed “bad bitch” was responsible for the event’s excellent turnout. All expected artists arrived, as well as CCP president Dr. Generals, several members of the Vanguard and Phi Theta Kappa, and students just passing through, scrounging for food and staying for art.

“For me personally, I always love to promote art and culture” says Jasmine, an art history minor expecting her Associate’s in May of 2020. The showcase has a lot to do with artistic expression in its various forms with students confidently being able to leave a mark on the school as they transition to a four-year college. To get featured, go to the club’s office in S1-12 and ask for J’Ro.

An artist who caught my eye was a student who goes “Zaria” jack of all trades in the craft whose skills include photography, graphic design, cinematography, writing, painting, and a
self-proclaimed craft and glitter enthusiast.

“For me, art is a part of my healing journey” she says. When Zaria first began her artistic journey, she was only taught about white male artists. “Very rarely was I exposed to art by women of color and the only time I saw them, it was from the male gaze.”

Zaria took it upon herself to let it be known that her art was worthy of praise alongside white male counterparts. On the table, were four pieces with her face on them coupled with graphics, almost as if it were a way to interject an outspoken black female artist into it and say “this is who I am.” “This pieces are significant to me because, not only to feature myself in a period where I was learning to find self-acceptance as a black woman, but also because it was a period in my life where I didn’t know where to begin my healing process.”

This is evident from the way her face appears on her work, surrounded by a jumbled mess while looking perplexed. Other artists came to the event and the Student Government Association will have another at the beginning of December. This year at the college will have a great deal of focus on the arts, including the English department’s partnership with Toho Journal and Green Street Poetry, an open mic series in the works, the LGBT Center’s upcoming drag shows, Loser Leaves Town, premiering this November, and the Vanguard covering it all. This is shaping up to be an exciting 2020 for all!