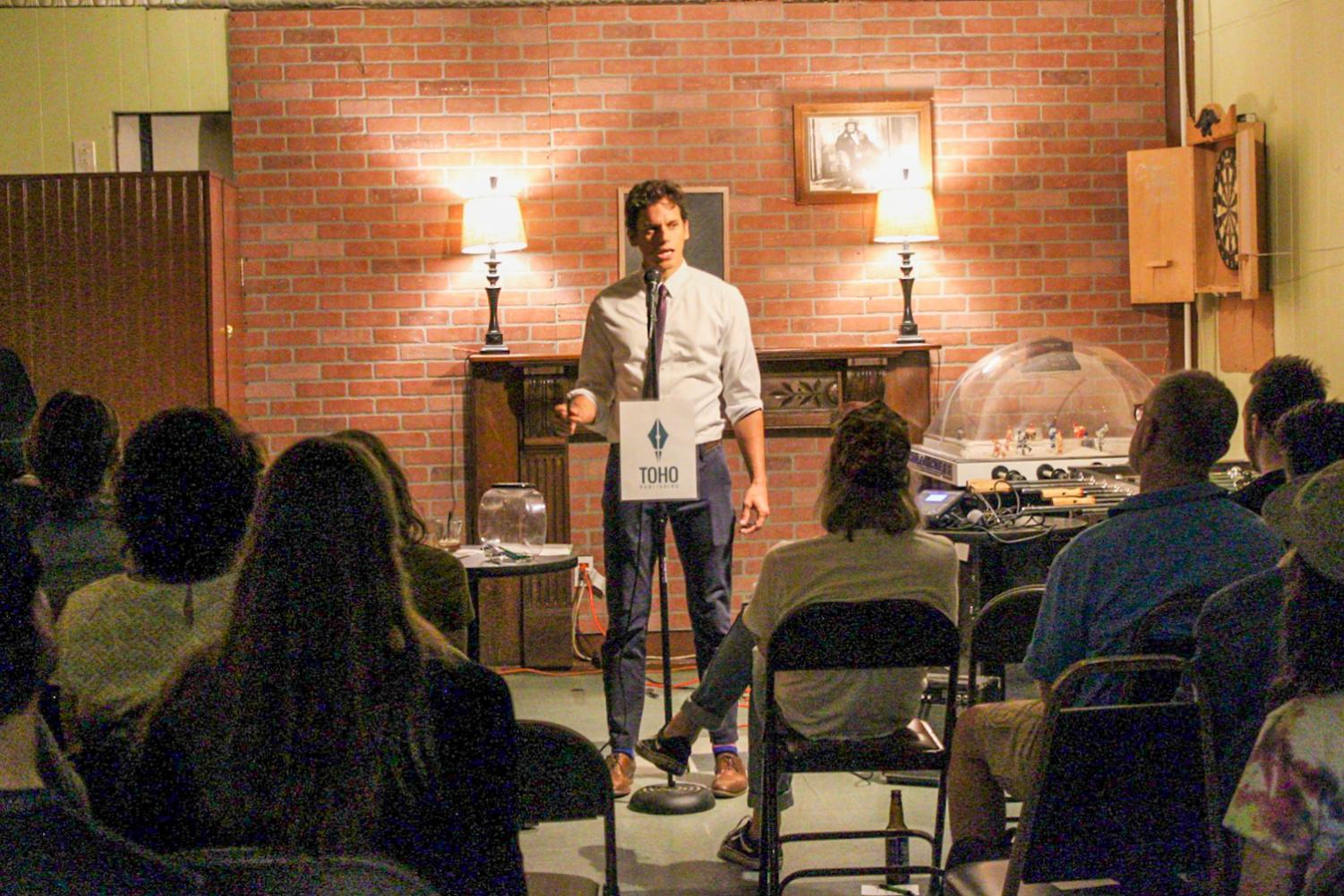 The empty canvas, vacant camera rolls, and blank pages
are the battlefield of a different
kind of warrior. It was last semester on a random Monday night.
I found myself at a poetry open mic
hosted by The Free Library of Philadelphia. With just enough
nerves to embarrass myself, I stepped up onto the stage. I had
no idea the doors that would open.
The crowd was a mix of novices and the experienced.
Josh Martin, an experienced poet,
approached me at the end of the event and suggested I attend
his workshop, Green Street Poetry. A few weeks later, I was at
the (now closed) London Grill on a random Thursday, I had
printed off a few poems and made my way to another
opportunity to test my nerves. A couple poems into the night,
after a warm welcome from Martin and Andrés Cruciani, Toho
Journal’s founder, I found myself struck by the embrace of
constructive criticism that built confidence and promoted
creativity. Soon, Andres extended another opportune invite,
only this time to a prose writing workshop.
There must be something about that number three. After
spending some time learning from the poetry workshops, I
found myself stepping into that all too familiar uncomfortable
position of putting my art up for judgement—again. And again,
I was met with a level of understanding and positivity that
promotes growth.
Held at Win Win Cafe Bar, the Toho Thousand-Word
Workshop left me inspired, motivated, and, if I’m being honest,
validated in my efforts to become a writer. It was a remarkable
experience. I was able to take the lessons I had learned in CCP’s
classrooms, apply them, discuss them, and style my writing
with a diverse group of experienced writers.

Writer and executive editor of Toho Journal,
Andrés Cruciani has opened the pages of
the journal to the students at The Community College of
Philadelphia. The journal is offering an
exclusive section for the students of CCP. Cruciani
wants to create a place where students can
sharpen their skills, hone their craft, and obtain
recognition for the hours toiling behind closed
doors and in the classroom.
“With CCP,” says Cruciani, “we seek to build
community and nourish budding writers
and artists, particularly those who have never been
published before. We want to change that
fact!”
Most days, Andrés can be found at the OCF
Cafe in Fairmont making phone calls, emailing writers,

or heading out to meet with talents throughout Phila-
delphia. Through Toho Publishing, the journal’s parent

company, workshops, readings, and all sorts of perfor-
mances have been put together for budding artists—be

they musicians, painters, or writers. And now, he
looks to turn the spotlight onto the Community College
of Philadelphia.
Alongside a group of talented writers and poets,
Cruciani, author of the recently published novel The
Father, helped establish Toho Journal with a unique goal
in mind: “One possible interpretation of toho, an ancient
Japanese word, is sword. It embodies the
journal’s goal of cutting to the essential. With a five
hundred-word limit on submissions, we
challenge writers to draw out the impact of every word.
But ultimately, our goal is simple: we
seek to empower writers.”