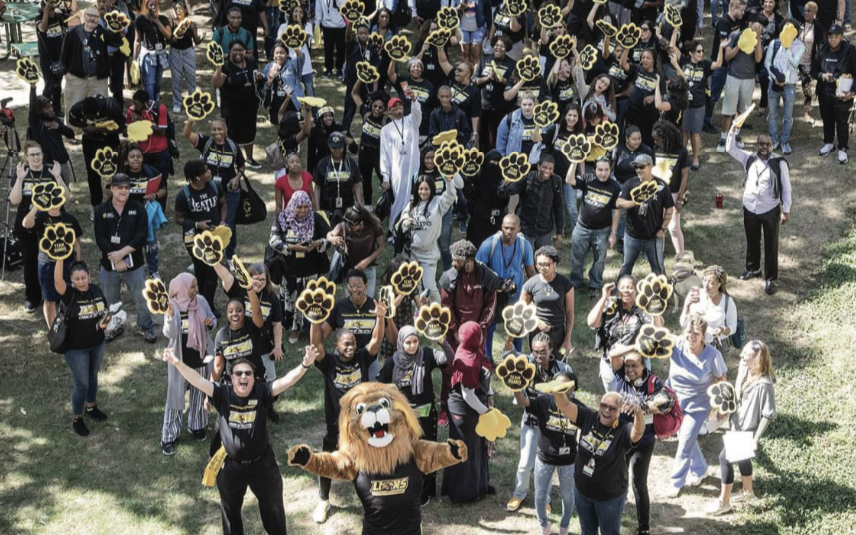 The Community College of Philadelphia released a new face this September that even has Hooter the Owl turning his head all the way around. Introducing Roary the Lion, the new mascot to replace Colonial Phil and to better represent the college’s majority demographic. Along with a new face, school pride has been heard roaring all over cam-pus and the Black and Gold Bash this past September was just a part of the hype as the signs and paw prints posted everywhere from the Pavilion to Bonnell. All this school spirit, brings a smile to my face, but who exactly is Roary?

Our new character is a way to better represent the college’s demographic, maybe a bit too much given that they have a backstory appealing to, not just the school, but Philly as a whole. At the release of the new beast and even on the website, where Roary is described as a “foodie” with a diet consisting of pretzels, cheesesteaks, and “wooder ice” all met with me rolling my eyes.

Nevertheless, Roary was able to steal the show at the Community College of Philadelphia’s black and gold bash. Every booth emptied to see the new mascot and participated in a successful attempt at the world’s loudest roar. Even after the unveiling, Roary continued to make great strides around campus, even being able to perform in the MarcDavid LGBT Center’s drag show.

While Roary is considered a breath of fresh air in terms of mascots, some see it as pandering. Not too long after they were introduced, Philadelphia Magazine’s LGBT columnist, Ernest Owens wrote a piece titled “I’m Queer and I Think CCP’s New ‘Non-Binary’ Mascot Is Pandering Nonsense” in which he criticized the college for slapping a label on something that seems unnecessary instead of helping the college’s trans and non-binary demographic. Another critique of Roary is by a non-binary individual who goes by @MxAbdulAliy on Twitter who said “Soooo, what is @CCPedu doing for actual non-binary students? This just seems opportunistic and not intentional.” If you want to hear a non-binary student’s take on Roary, Lumen Lugo-Roman gave another jab at the mascot after an informative, yet melodramatic email was sent out about their gender. “Students are already being misgendered. The mascot is just another student at this point, and it seems counterproductive and pandering to throw the identity of non-binary on a mascot just cause.” I can see where all are coming from given that the person inside the mascot is not non-binary. Griffin Fadellin does a great explanation of the matter in this edition of the Vanguard.

Love them or hate them, Roary is here to stay. Be it pandering or not, the mascot is a new edition to the CCP family and a mightier one at that. Roary exudes strength, courage, determination, and pride, something that after three years of being at this college, students and staff alike exude too. Welcome Roary! In spite of the shortcomings, I’m glad to have you!