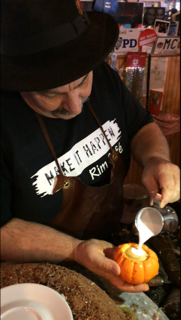 It is about that time of the year when many people get excited about pumpkin dishes and drinks.

There are many places that sell those seasonal pumpkin-flavored products around Philadelphia. However, not all are as unique as RIM Café in South Philadelphia. It is one place that you do not want to miss during the 2016 pumpkin season.

RIM Café is owned by a French entrepreneur, René Kobeitri, who is originally from Nice, France. The name of the café, ‘RIM’ is from his son’s name, Rémy.

Mr. Kobeitri said he did not originally expect to start a business here in the U.S., since he already has been successfully running several businesses back home.

“It was ‘un bon accident’. A good accident in English,” he explained.

Apparently, Mr. Kobeitri came to the States for a vacation and fell in love with the country.

“I absolutely fell in love with the Italian market and I got inspired by the owner of Geno’s Steaks, Joey Vento,” he added. That is when he started a new venture in South Philly, creating his own hot chocolate, coffee, and cannolis.

Soon after in 2007, Mr. Kobeitri was renowned for “making the city’s best hot chocolate” by Philadelphia magazine.

“Americans are really good at doing business. They are all over the world,” he says, noting he believes anything can happen in this country.

“Make it happen” is René Kobeitri’s motto. It keeps him motivated and creative as a café owner.

“I want to be the first of everything that I create!” he said.

Although the internet has allowed us to find any information with easy access in a short amount of time, he wants to be a pioneer who has ambition and pride of what he is doing. Therefore, whenever a new idea comes across in his mind, he goes downstairs to his café and tries to make it happen.

The pumpkin latte in an actual pumpkin is one of his many fascinating creations. It starts with carving the pumpkin to make it as a glass and scatters a little bit of sugar inside of the pumpkin before he pours espresso and milk foam in the pumpkin.

Then, he decorates it with homemade pumpkin salty caramel as a final touch. This all happens on the spot when his customers order their drinks, which is a priceless experience for the customer.

Mr. Kobeitri is well connected with his patrons on social media. He even broadcasts his new creations via Facebook livestream, which is a great source to know up-to-date information about the RIM Café.

Whenever Mr. Kobeitri serves his customers, they are not only getting outstanding drinks, but they also get authentic experience. “I make it with love. I pour love in it,” Mr. Kobeitri says.

Regardless of all of the persistent effort and hard work that it takes to run a business in a foreign country, Mr. Kobeitri definitely loves what he does.

“You should love what you are doing instead of following money. Money will come along when you pursue what you love,” says Kobeitri.

Most college graduates tend to seek out a high-paying job regardless of their happiness, however this message from Mr. Kobeitri is quite inspiring and it is something we all should think about.