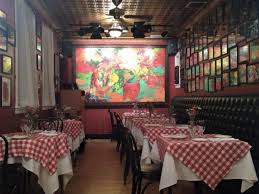 With a significant historic and celebrated Italian-American population, South Philadelphia has a plethora of local Italian restaurants to choose from that will leave your taste buds drooling. However, of all the delicious choices available, only one restaurant will deliver phenomenal food, amazing live entertainment with your meal and the opportunity to dine on the set of a Hollywood movie – and a Rocky movie to boot!

Yo Adrian, it’s Victor Café located at 13th and Dickinson in Philadelphia.

Victor Café is the perfect recipe for a unique, great dining experience in South Philadelphia. Scrumptious Italian cuisine, a pinch of great vino, a tad of fresh Italian bread, and add in some live opera music and – Presto! – you have the fixings for the most uniquely enjoyable dining experience in Philadelphia. And for dessert, there’s the added benefit of dining where scenes for the movies Rocky Balboa and Creed were filmed.

Seen in the last two installments of the Rocky anthology as the restaurant Balboa owns, Adrian’s- named after the protagonist’s deceased wife- Victor Café was used for several crucial scenes in each of those films. One of the most iconic speeches in the entire Rocky franchise – “Life ain’t all sunshine and rainbows…” – takes place outside the venue. A movie prop still hangs in the rear of the restaurant – the painting of a sparring match between Apollo Creed and Rocky Balboa shown initially in the ending credits of Rocky 3 as “Eye of the Tiger” is played.
Victor Café is a delightful experience! The ambiance is remarkable. Decorated throughout the restaurant were paintings and pictures of singers, busts of composers above the bar and old-fashioned red-checked tablecloths on wooden tables that give the sensation of an Italian restaurant in the early 20th century or of a small Italian village. Venture up to the second floor to find another bar in the style of a speakeasy with eclectic art and posh velvet furniture.

An old axiom in opera opines, “it ain’t over until the fat lady sings.” Well, she must have dined at Victor Café because in addition to the food being exquisite, the performances by the staff can give any person a musical epiphany. The most delectable treat of this restaurant is without a doubt the waiting staff. In addition to being extremely courteous and very pleasant, they are immensely talented. Each of the servers of Victor Café are trained in singing opera. They come from all walks of life varying from performers, music companies to college students in music programs of Philadelphia’s universities. Every 20 minutes a different server rings a bell and sings an operatic song. During my dinner, I experienced 4 breathtaking performances. While I am hardly an opera or musical fan, I was happy to recognize one of the performances this evening, the renowned song “Maria” from Leonard Bernstein’s West Side Story.

While the majority of people are not opera fans, Victor Café is an experience to be had that is incomparable to any restaurant in the Philadelphia area. Amazing food, dining on a movie set of Philadelphia’s beloved Rocky franchise with spectacular performances on a nightly basis, Victor Café is arguably Philadelphia’s most precious jewel of the culinary world. You’ll depart the restaurant with a full belly, lasting memories and who knows, maybe an affinity for a new genre of music.