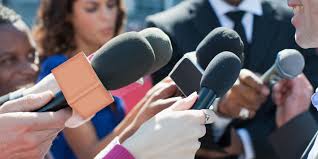 “Journalism can never be silent; that is its greatest virtue and its greatest fault. It must speak and speak immediately, while the echoes of wonder, the claims of triumph and the signs of horror are still in the air.” – Henry Anatole Grunwald.

You all may be familiar with the world of journalism. It’s a world that gathers information, investigates, creates, and presents news about the world we live in. With the progression of media, Journalism has taken on even more platforms: news, literature, broadcast, film, television, radio, magazines, digital, and social media. A lot of potential journalists and journalists see this as an opportunity. More people are beginning to study/work in the field of Journalism. Majority of these people are women.

In an article written by Susan Antilla in 2012 on CNN.com, she reports that in the past ten years, 70-76 percent of all journalism and mass communication graduates have been women. These women feel they have a way with words, that they wish to share with the world, yet something keeps getting in their way. So what’s the word on that?

There’s no secret men outnumber women in many career fields here in America but that doesn’t mean women don’t try and match the numbers. Today, in the field of Journalism, more women are the faces you see at six o’clock news, or the names you read under the bold headlines in the New Yorker. For women in the media, this is progress from where women were 50 years ago. But for those 70-76 percent of female graduates and many other women and spectators, they believe the job field in Journalism still needs some adjusting. Female journalists still face obstacles such as unfair opportunities, unequal pay, unequal coverage and recognition, and certain expectations of them because of their gender.

In this history of women in media, Journalism was seen as a dangerous field for women. Sometimes journalists are faced with kidnapping, threats, and harassment. Women therefore, were expected to stay home, cook, clean and take care of babies. Any women who did pursue a career in Journalism were making a bold move, from bottles to her bold point ink pen, because of that, men filled a lot of these positions and women who did step on the scenes had to work hard to earn the position she deserved. Getting the position is the first hurdle.

This brings me to the second hurdle women face in Journalism. Getting the position is one thing, getting more of those bold headlines and headshots is another. Women’s Media Center (WMC), was founded by Jane Fonda, Robin Morgan and Gloria Steinem. They report that, in evening broadcast news, men were on camera 68 percent of the time and women only 32 percent. They also reported that men generate 62.1 percent of news and women only 37.3 percent. CNN also says that in “thought leader” magazines such as The New Yorker, 242 of their bylines are by women and 613 of them are by men. Studies have found that when women’s voices are absent in the newsroom the stories of women around the world go unreported.

Reporting on female journalists around the world, it seems that they are winning over the journalism world in certain countries. According to Al-Monitor.com, Iranian journalists and women serving on editorial boards in Iranian newspapers has increased over the years. It is estimated that 60 to 70 percent of journalists working in pro-reform newspapers are women. Female editors and journalists have taken on important leadership positions at Iranian publications. Pro Journo, reports that in China, women in Business Journalism are on the rise. The Economist recently appointed its first female editor-in-chief. Zanny Minton Beddoes. It may have taken sometimes but at least the time has come. So despite the many obstacles female journalists are faced with, they are overcoming each of them a step at a time.

There are also many organizations that promote women in media and provide them with the resources they may need when entering or already in the field of journalism. Women in action and the Media (WAM), is an organization that helps with networking and skill sharing amongst female journalists. Black Women in Media (BWIM) acknowledge the black women in media who have had successful careers as journalists and news anchors. Some of them work here in Philadelphia. They include Jacqueline London who is a co-anchor at NBC10 news and Nefertiti Jaquez, who also works at NBC10. WIM Philly is a collection of small business owners and media professionals who graduated from either both Temple, which has a major Journalism program here in Philadelphia, and Spellman College. WIM is an organization created to encourage and empower women in media and highlight the need for female professionals in media.

For some that need is being met, for others it may be sometimes before the women of the journalism world, words and work are received, and they receive the raises and recognition they deserve. Now, that’s the word.