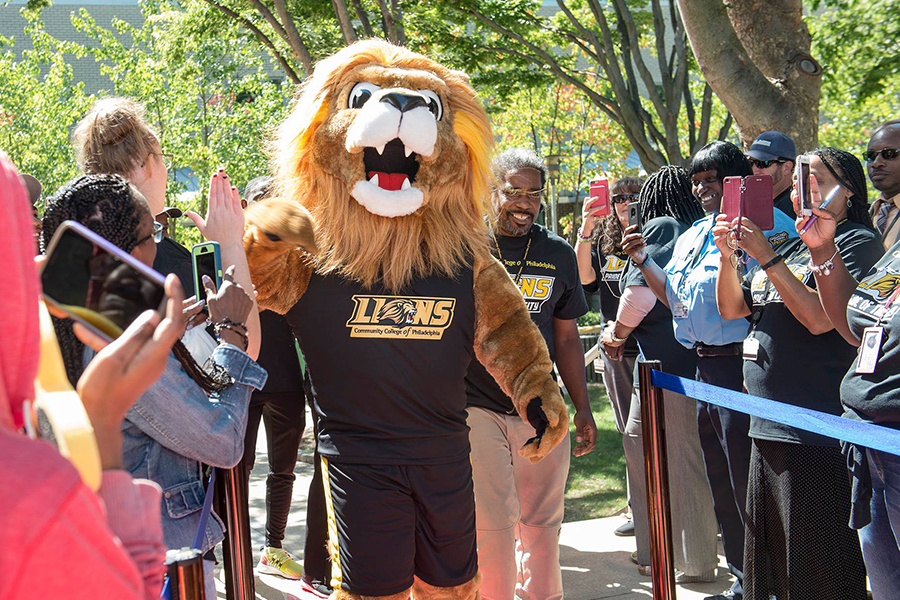 On September 17, CCP unveiled its new mascot, Roary the lion, during their Black and Gold Bash. I sat at the Vanguard’s information table and managed to miss nearly all of the reveal. What I did hear was mostly good. People overall seem to like Roary a lot, and find that the mascot was a good choice.

For those who haven’t read or heard it yet, Roary’s backstory is, to me at least, surprisingly sweet. Roary comes from a reservation in Botswana, where many of the lions there are intersex—demonstrating physical attributes typical of our notions of both male and female lions. Roary uses they/them pronouns and identifies as nonbinary, an umbrella term in the transgender community that encompasses lots of identities that are not exclusively male or female, the two binary genders.* According to their story on the website, after immigrating to America they fell in love with Philly, and seeing the maned brass lion statues on the Mint building’s steps helped Roary decide that CCP would be their home.

A few days after the reveal, an opinion piece was published in Philadelphia Magazine by Ernest Owens, titled “I’m Queer and I Think CCP’s New ‘Non-Binary’ Mascot Is Pandering Nonsense.” It’s worth reading, and has a few fair observations about the college’s behavior. (Though I do have some criticisms—its click bait-y title and slightly, perhaps misleadlingly, condescending quotation marks around “non-binary,” for starters.) The article says that, from that queer journalist’s perspective, CCP’s new mascot looks like a cynical marketing tactic to garner support from LGBT+ students and organizations. In lieu of investing in making the school more safe and comfortable for LGBT+ students, at best we were given a symbolic gesture of “support.” At worst, he says, it’s an example of rainbow capitalism, purely an icon meant to extract money from the LGBT+ community.

As a nonbinary student (and citizen of the 21st century), I am equally as wary as Owens in situations like this. But, like in most things in life, there’s a context here that is important to be aware of.

Vincent Scarfo, director of our campus’s MarcDavid LGBTQ Center, sent an open letter to students and staff on September 23rd. In it, they detail some of the considerations of why the mascot was chosen to be nonbinary. For the design, the creative team wanted it to look like the lion statues on the Mint Building steps, which have manes. But, as school mascot, Roary would be mostly representing the majority women CCP athletics teams. While the creative team tried to think of a way to solve this conundrum, Vincent suggested an idea—the possibility of basing Roary on a real-life population of lions in Botswana with mixed sex characteristics.

Both she/her and they/them pronouns were discussed for Roary, but what ended up tipping the scales was the possibility of having a conversation on campus about what it means to be intersex and nonbinary. It would be a rare opportunity to have gender nonconforming students at CCP be included in discussions of what our college really looks like. Education about pronouns and what these new words mean is crucial for improving the lives of transgender people. It’s often the case that if gender and pronouns aren’t discussed explicitly and properly, trans people will never be treated as who they actually are, rather than how people perceive them to be.

Roary’s unveiling was a fantastic opportunity to have these conversations, which is exactly why it was so disappointing. While the design and marketing teams were excited for this chance and diligent on social media, the push toward inclusion was undercut by the college administration failing to lean in and do the job properly. Roary’s gender was mentioned once with little explanation and quickly forgotten; unbriefed student leaders stumbled, forgivably, with pronouns; and Dr. Generals, president of the college, couldn’t manage to get his own school mascot’s gender right.

Ernest Owen’s opinion piece was written without the full context of Roary’s creation, and how it came from a place of thoughtfulness and, in my view, a genuine desire for inclusion and education. Still, I can’t fault him for the way he perceived it, because much of the criticisms ring true. Without the necessary background and because of the apathetic administrative handling, this mascot does look like a cynical marketing move. The college failed to start a necessary conversation when they first revealed Roary—but maybe it’s not too late to start it now.

*As an aside, it should be noted that intersex and nonbinary are two different things. If these terms are new to you and you would like to learn more, you can check out transequality.org or A Quick & Easy Guide to Queer & Trans Identities by Mady G.