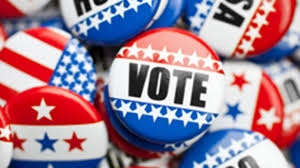 On your mark, get set, go…. It’s that time again. It’s time for our country to elect a new President. Barack Obama’s two terms have almost reached their finish line and now we have a whole new list candidates running for Commander in Chief.

Representing the Republican Party is Donald Trump, Ted Cruz and John Kasich. And for the Democrats, it’s Hillary Clinton and Bernie Sanders. This so far has been one heck of a race — and lots of other candidates, including Jeb Bush and Rand Paul, have already dropped out. Some portions of this race have left some of us speechless and others with a mouthful. So I decided to chit chat with the student body here at CCP to get the word on this presidential 100-meter dash.

Now the majority of people I got the opportunity to speak with said they are already registered to vote. (Which is good.) On March 24th, volunteers were here on campus helping to sign up those who weren’t registered. One of the volunteers told me that on sunny days like the 24th was, they are able to sign up about 70-100 people.

March 28th was the last day to register and April 26th is the Pennsylvania primary. According to pa.gov, as of March 28th, 2016, in Philadelphia there were over one million registered voters. The political breakdown consists mainly of Democrats. There are nearly 800,000 here and over 100,000 Republicans. There are a little over 80,000 non affiliates and over 20,000 others. Philadelphia has the largest number of voters any municipality in Pennsylvania. In Pennsylvania, overall, there are eight million people registered to vote here and some of them are students registered here at CCP.

Ernest Railey, a student here at CCP, and also a key member of the International Global Organization (IGO) on campus, says he’s most interested in Hillary Clinton.

Ernest says the mission of IGO is to promote cultural awareness and global diversity and he wants a president that is willing to fight for equality. He believes that Clinton is that person.

“She is willing to fight for our rights and, more importantly, the youth,” he said. His least favorite candidate? Donald Trump. “He has a big mouth,” Railey said.

Since we are an educational institution I asked him about the future of our education system, too. “Resources that are limited to those who want to go back to school should be made more accessible. We also have to make sure our youth receive a full and fulfilling education. The youth are the future leaders of the world,” he said.

I asked him if he believed America is ready for a female president.  He said, “People are not afraid to let a woman lead. The current President in Liberia is a woman. Her name is Ellen Johnson Sirleaf. She is carrying Liberia further.  Like Obama said “YES WE CAN”!”

Will Hillary make history? I got the chance to talk to Will, another student here at CCP who claims it isn’t really about her making history or not because the president isn’t the one who makes the laws.

“We watch the presidential election from its beginning to its end when the President isn’t even the one drafting the laws. We don’t pay attention to the actual lawmakers and that is why we don’t know the law,” he said.

I also had the opportunity to speak with Mohamed, a student here at CCP and a member of the Muslim Student Association here on campus. There have been some jaw dropping comments made about Muslims during this political race — especially by Republican candidates Donald Trump and Ted Cruz.

“I see Trump as a businessman rather a politician,” he said. “Being a businessman and making business moves varies from making presidential decisions.”

I also asked him his thoughts on Trump’s tangents about Muslims and if he is elected what would that mean for Muslims.

“I believe he lacks cultural understanding of religious obligations to certain religious groups,” Mohamed continued. “If he is elected, hopefully his advisory will educate and advise him on aspects of international cultures…He is promoting division, which is one of the downfalls of America. America has a culture based on many cultures, races and ideologies.”

So the race continues until November 8th, 2016. So no matter your race, age (as long as you’re old enough to vote) or your beliefs, be sure to vote. We the people have the power to elect the next president, so spread the word!