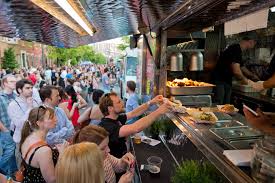 If you’re business-minded, being your own boss is probably something in which you’re interested. With the mobile food industry growing, the college is helping entrepreneurs interested in the industry create a mobile business they can be proud of. Not only is it affordable, but it’s an industry that could take you anywhere. Literally.

The CCP Food Truck course is set up in a series of three, five week courses. There are no prerequisites, so in theory someone could take one per semester, or all three in one semester, and in any order they desire.
John Olsen, a professor at CCP, helped design the class and has a great passion for the industry.

Surprisingly, the course doesn’t fall under the culinary department but under professional training instead. This is the third semester it’s being taught at the campus.

The first section of the program covers building a concept and a plan, branding, menu items, food theory and coming up with a catchy name. It’s not all directed to food trucks, either. “It’s mobile food management,” Olsen says. “There are a lot of things it encompasses.”
There are also tow-behind carts, which is much cheaper than the traditional food truck. One famous tow-behind cart in the city is Spot Gourmet Burger, usually located at Drexel University on 33rd and Arch Sts. It was the winner of Rewrapped on Food Network Food Truck of the Year award in 2012, and on Zagat.com was the winner of top ten best burgers in Philly multiple times.

The owner, Josh Kim, painted his little cart a bright yellow. He’s infamous for specializing in hand-crafted burgers, using 100 percent ground sirloin beef that he butchers himself. His truck became so popular that he is currently in the process of opening a restaurant at 2821 W. Girard Ave. in Brewerytown. “Piece by piece, it’s coming together,” Spot Gourmet Burger’s Facebook pages states in a post Oct. 29, 2015. It’s expected to open soon.

There are several types of mobile vendors, the food trucks, tow-behind carts, kiosks (the people that set up tables on the sidewalk), and trucks with shelves and pop up tents. Those vendors mostly work from the back of their truck. They all have the same regulations, but some have a little bit more than the others. This is why section two of the course is so important.

The Program here is designed to make sure the graduates from CCP’s mobile food management program don’t breach those regulations, such as the ones most students see outside of the campus on N. 17th St. do. For example, it can be seen throughout some of the vendors on N. 17th St. that some of the truck’s tires are propped up on wooden blocks to keep the vehicle level. Not only is this against the law, but it’s extremely dangerous because the city of Philadelphia doesn’t required a vendor to have a fire suppression system in the truck. According to the Mobile Food Vending Unit-Plan Submission Guide on Phila.Gov; page 2, REQUIREMENTS FOR MOBILE VENDING UNIT FOODSERVICE OPERATIONS “Mobile food units must be constructed so as to be easily movable by one person when fully operational and in compliance with all other provisions of the Philadelphia Vendor Code.”

If the truck is up on blocks and needs to move in a hurry, how long would it take to move some of those vehicles? What if the blocks slip from under the truck shaking the wrong equipment and then the propane tank explodes? It could be a disaster. That’s one of the many regulations several of the vendors on N. 17th St. are breaking, but the graduates from CCP’s program will not.

Section three of the program focuses on design, cost and budgeting. The program collaborates with The Enterprise Center located in West Philly. On their website, theenterprisecenter.com, their mission “is to cultivate and invest in minority entrepreneurs to inspire working together for economic growth in communities.”

The Enterprise Center has an authentic restaurant and something called the Center for Culinary Enterprises (CCE), which is a shared kitchen for chefs to rent out and try their recipes on actual customers. They can also rent food trucks, as well.

The Mobile food management program at the college also tries to get different vendors to come to the campus as much as possible, usually once a week. This is so the students can see how real functioning food trucks work, and not have to attempt to be inspired by the grimy one’s sitting outside the campus on N. 17th st. The students can brainstorm ideas and ask questions about the food trucks that come to campus on those days.
The last day of class the students get to go to Executive Auto Salon, located on 5223 Torresdale Ave., a mobile food truck manufacturer. They get to see how the trucks get built, everything from the plumping, to the paint job, to the electrical layout of the truck.

As of now the course isn’t covered by Financial Aid, but each section costs $275, which is a small price to pay for learning how to run your own business. The first semester it was taught at the school it had four students attend, the second semester had 24. As it grows, hopefully it will become covered by it so the young entrepreneurs at the community college of Philadelphia can capitalize on such a great opportunity to learn how to be their own boss.