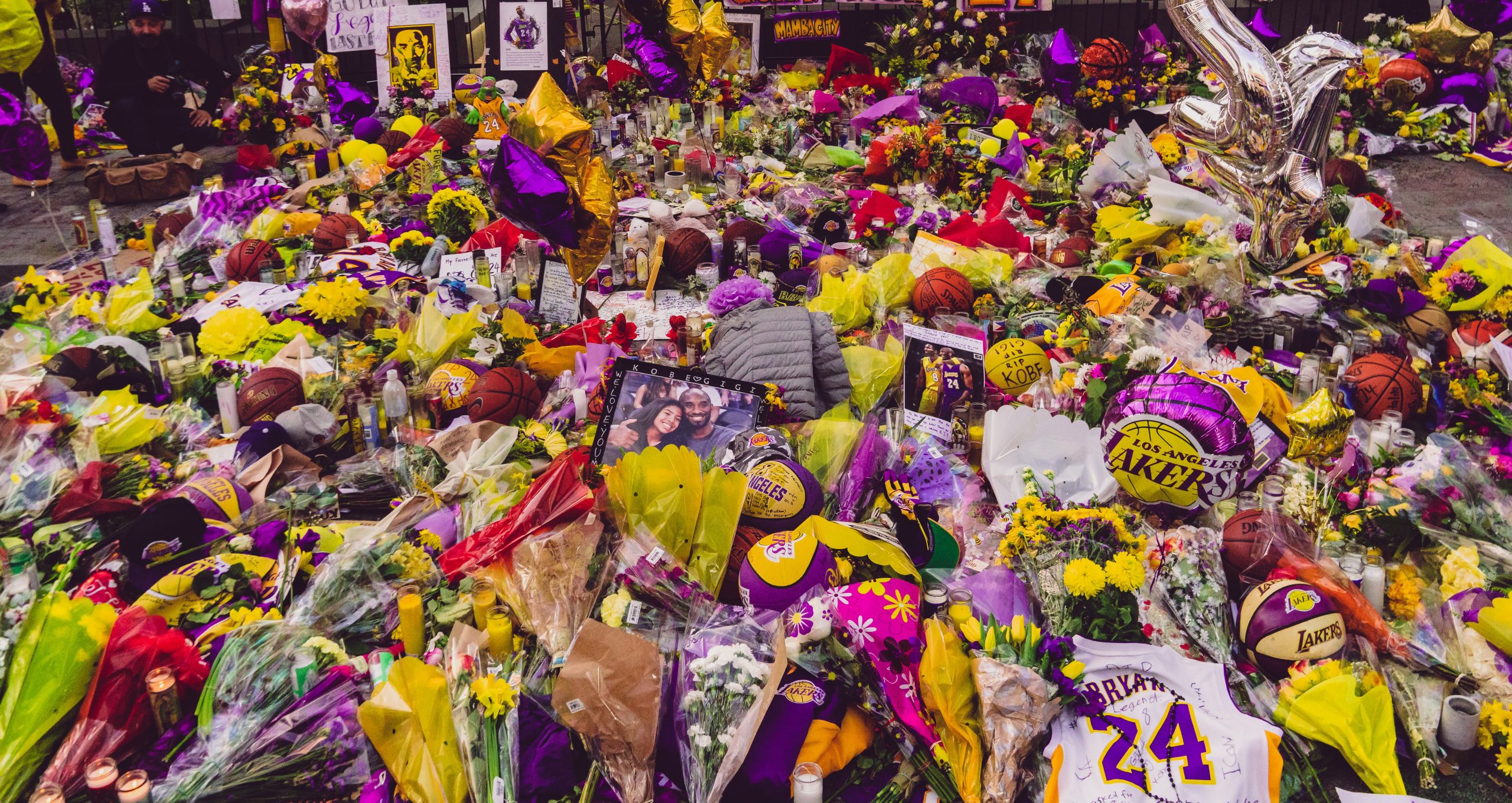 January 26, 2020, what began as a normal day only ended in utter despair. At about 12:45pm eastern standard time the world stopped on its axis, frozen and shaken to its core. Kobe Bryant had died in a helicopter crash. Kobe Bryant was accompanied by his daughter Gianna Bryant, John Altobelli, Kerri Altobelli, Alyssa Altobelli, Sarah Chester, Peyton Chester, Christina Mauser, and pilot Ara Zobayan. The group of nine was on its way to the Mamba Sports Academy for a game in which Kobe and Christina were to coach, and teenagers Gianna, Peyton, and Alyssa were to play. The group would never make it to their destination; The helicopter would make a “climbing left turn” before fatally falling in the Calabasas hills, killing all nine.  As a tribute to Kobe I took the liberty in asking people on campus what type of impact Kobe Bryant had on their life, their favorite Kobe moments their reaction to his passing.

Malik Johnson said that the 2001 NBA finals which featured the Philadelphia 76ers and the Los Angeles Lakers put him onto basketball, “Watching [Allen Iverson and Kobe] got at it and seeing him win [in the fashion that he did] started my love for [basketball]. The Lakers would go on to win that series 4-1 over the 76ers but in that series Bryant averaged 24.6 points, 7.8 rebounds and 5.8 assist per game, his counterpart Iverson averaged 35.6 points, 5.6 rebounds, and 3.8 assist per game.

Cybersecurity major Shae Sloan said, “I played against him when we were younger…. I watched him play high school ball. His jerseys were always big… when he would cut [to the basket] his jersey would just fly up in the air and by the time you noticed he was gone, he’d be on the other side of the court, It just showed he was special.” When asked about his death Sloan said, “It’s like this nightmare that you can’t wake up from because of what he meant not just to basketball or this area but globally. Kobe impacted more than just basketball, he was an ambassador for women’s basketball. For all the kids who really didn’t have direction, if you seen Kobe Bryant and listened to him talk that just told you everything”.

Business major and CCP men’s basketball player Cameron said, “Kobe had a big impact on me because…he always preached working hard and doing stuff that other people wasn’t doing and every time I looked at his workout videos it made me feel like I needed to do the same thing to become a better me each day”. Cameron loved Kobe’s commercial with Kanye West because it taught him to keep achieving.

Cybersecurity major Jamir said, “Kobe has impacted my life by showing me how dedicated someone can be, [he showed that] you can get through any obstacle that comes across your life. I believe [Kobe inspired me] to be responsible and dedicated in my academics. Jamir admired how Kobe bonded with other players.

English professor and 76ers fan Nate House said, “[Kobe] was the enemy because he was one of the greatest players and one of the reasons we don’t have a championship… I think we can earn a lot of lessons from him about what not to do.

Knicks Fan Eddy said his favorite moment was watching Kobe drop 61 points in Madison Square Garden, “Our team was trash, he would just go in on us…I hated him”.

Business General major Jarred said, “Kobe taught me to never be satisfied, to always better yourself day in and day out. Jarred’s favorite Kobe moment happened during the 2009 NBA Finals in a press conference. The Lakers had just gone up 2-0 on the Orlando Magic when Kobe was asked why he did not have a smile on his face or appear to be happy after taking a commanding lead in the series. Kobe responded by saying, “What’s there to be happy about? [The] job is not finished”. The Lakers would go on to win that series 4-1 and Kobe Bryant was named finals MVP.

Author and empowerment speaker Jarron said his favorite Kobe moment in 2010 when Matt Barnes ball faked Kobe on an inbound pass, “Kobe didn’t even flinch, that was courage.” Jarron also loved Kobe’s interviews, “[he was always talking about his own life and what he wanted to do to help [the next] generation grow”.

Athletic Director Roger Glispy said his favorite moment was when, “[Kobe] came here to CCP’s gym (pictured above) shortly after he had announced he was going to the league [in 1996]”.

Overwhelmingly, people loved Kobe Bryant’s last game.This was a game in which Kobe scored 60 points, the highest point total by any retiring player. In the final three minutes and ten seconds of that game Kobe brought the Lakers back from a ten-point deficit against the Utah Jazz by scoring 15 points, leading the Lakers on a 17-2 run. Kobe ended this performance in true Black Mamba fashion by draining the go-ahead jump shot in the waning seconds of the game, simultaneously eliminating the Utah Jazz from playoff contention. Shae Sloan summarized this moment best, “it personified everything Kobe was about…Mamba Mentality”.

As for myself (Brandan) I have two favorite Kobe moments the first happened in 2006, game 4 of the first round playoff series between the Los Angeles Lakers and Phoenix Suns. The game had gone into overtime and in the final seconds with his team down a point Kobe recovers a loose ball drives down the court and raises up for a fadeaway jump shot over two defenders, as the ball is in the air Kobe points at his head twice as if he knew it was over, and sure enough it was. In celebration of the win Kobe tugs at his jersey and lets out a loud “woo” Rix Flair style. My second favorite Kobe moment happened in 2013 When the Lakers played the Raptors in Los Angeles. In the final two minutes the Lakers were down by five and Kobe went on to hit three heavily contested three-pointers to force overtime. In the final seconds of overtime Kobe drives by all five Raptor defenders for a two-handed jam to win the game.

There is an incredible amount of sympathy felt for Vanessa Bryant and the families of the others involved in this tragedy. Some people are still having a hard time believing that it is real no one could imagine what they are going through and how they will carry on through life.

The passing of a generational icon in Kobe Bryant did nothing but cement his career and legacy as one of the greatest if not the greatest competitors this world has ever seen. His will, determination, and refusal to lose was something that was unmatched. It is sad knowing that he is no longer with us on this earth, but others will continue to carry on the legacy of Kobe Bryant by telling his stories, yelling “KOBE” after every shot, and most importantly by using the Mamba Mentality. The Mamba Mentality as Kobe defined it in an INQUIRER.net interview is, “A constant quest to try to be the best version of yourself…to be better today than you were yesterday”. The love for Kobe will continue worldwide, murals were made not just in America, but in places like the Philippines and China. Several NBA players honored Kobe by changing their jersey numbers from 8 and 24. Teams honored Kobe Bryant by taking 8 and 24 second shot clock violations in their first game played following his death. A memorial for Kobe and his daughter Gianna will be held at Staples Center on February 24. The legend that is Kobe Bryant may be gone, but never forgotten, long live Mamba.