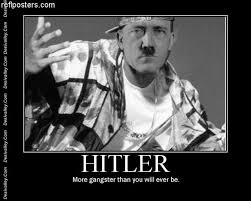 Hitler famously said, “Through clever and constant application of propaganda, people can be made to see paradise as hell, and also the other way around, to consider the most wretched sort of life as paradise.” When Adolf Hitler took power in 1933, the Nazi regime deployed the radio, press, and newsreels, to stoke irrational fears in the public of any ideology opposing their agenda. He realized how important it was to control the media and indoctrinate. Hitler’s ire focused on those he deemed bigoted and prejudiced against his movement.

These are all things that have been used by the Democrats to describe the Republican nominee for President, Donald J. Trump. Political mud-slinging is nothing new and frankly, the Republican candidate could be the reincarnation of Martin Luther King Jr. and they would still be branded as a bigot. However, this year, the vitriol seems to be darker than ever before. Trump has taken stands on many controversial issues and his positions have garnered the wrath and venom of the sanctimonious, holier-than-thou political left. One of the attacks on Trump is he is a divider and filled with hate and the Democrats are the only option for unity and peace.

On July 22, WikiLeaks released twenty thousand emails from top execs of the Democratic National Committee (DNC) that reveal a startling lack of the Democratic Party’s impartiality during the primaries. These emails reveal that the leaders of the DNC openly criticized Hillary Clinton’s opponent in the primaries, Senator Bernie Sanders and sought to influence the election in Hillary’s favor. This information comes roughly a little over a week after Clinton was caught lying about her wrongdoings in the FBI investigation of her email server (in what seems to be her zillionth scandal).

Throughout the primary, Sanders claimed he thought the system was “rigged.” The WikiLeaks, appropriately dubbed as the “Hillary Leaks series,” validated Sanders’ claim and exposed that Democrats are as much a unifier as Judas at the Last Supper.

The emails from the accounts of Wasserman-Schultz and her cronies stem from January 2015 to May 2016. It reveals the DNC’s hatred for the Bernie Sanders movement and the heights of corruption of the Democratic Party infrastructure. They highlight conversations discussing strategies to combat the popularity of Bernie Sanders. The “Hillary Leaks series” has been devastating for DNC chairperson (and former Congresswoman), Debra Wasserman-Schultz. The emails revealed that the former Congresswoman routinely did things to “thwart” Sanders and propel Clinton. She is the Keyser Soze of politics. (Google The Usual Suspects if you don’t get this reference)

Under Hitler, the Propaganda Ministry mandated that the regime required editors to omit anything “calculated to weaken the strength of the Reich abroad or at home.” In one email, people at the DNC were seeking ways to curb greater enthusiasm for Sanders than Clinton among Democrats.

In an email dated May 5th, a DNC staffer sought to collect information on the religious beliefs of Sanders as a method to sway voters in West Virginia and Kentucky. This is especially hypocritical because the DNC are the same group that previously manufactured a crisis from a Trump tweet using a 5-sided star that resembled the Star of David as an example of anti-Semitism. And, lo and behold, it turns out the DNC was going after one of their own’s Jewish beliefs.

In yet another incriminating example of the liberal bias in media – the bias liberals swear up and down does not exist- an email dated May 15th shows how the DNC was orchestrating the news on television programs and specific websites related to the Democratic Party, Clinton and Sanders.

A Real Clear Politics article claimed that Sanders supporters are responsible for a lack of unity in the Democratic National Convention. Wasserman-Schultz took issue with the headline and told another DNC official the “headline needs to be changed.” A back and forth exchange followed between DNC officials to force Real Clear Politics to alter their story. The final email on the thread reads, “Done. Article has been updated.”

• Offering to send interns out to fake a protest against the RNC
• A mole working inside the Sanders campaign
• Politico writer sending his stories to the DNC before he sends them to the editor
• DNC feeding CNN the questions they want to be asked in interviews
• Creating a fake job ad for a Trump business to paint him as a sexist
• An email sent to “Meet the Press” host Chuck Todd by Mrs. Wasserman Schultz demanding negative coverage by MSNBC’s Mika Brzezinski “must stop”
• Super PAC paying young voters to push back online Sanders supporters – paid shills
• DNC discussing their relationship with NBC/MSNBC/CNN and how to get better treatment
• DNC telling each other, “I love you too, no homo”
• DNC making fun of a black woman’s name

Donald Trump is routinely criticized that he is a populist and a demagogue, saying things only to gain support of the people. Well, if that is true then what do you call people that champion the causes of the African-American and LGTBQ communities in public but behind doors are ridiculing them?

Freedom of the Press is one of the foundations of the Bill of Rights in the Constitution. Censorship has no place here and neither does manipulation of the media to promote an agenda – a dangerously, corrupt, dishonest liberal agenda. It is unethical and hypocritical of a political party that champions itself as fair and honest and looking out for the American. It is dishonest and it is indoctrination at its worst.

It is something Hitler did.