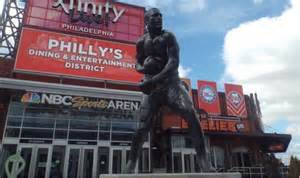 First of all, Rocky is a copycat. Running up the steps, like Rocky did in the movies was stolen from Joe Frazier. Frazier practically invented it and never got the credit. The fact that the Rocky’s statue was placed at the Art Museum instead of Frazier’s is lunacy.

The idea that Rocky is Philadelphia’s boxing god is a shame, because he’s a fictional character. He was made to give people entertainment, fantasy, and enjoyment, but most importantly to cover up. People will fall for anything that is a great story. It’s a voodoo-mind-trick that Hollywood writers use to suck people into the fictional story, and take from real life legends like Frazier.

For starters, Frazier was a true fighting champion. It shocks me to see so many people over look a true Philly legend. Frazier won the heavyweight title by a shocking TKO victory over Jimmy Ellis in 1970. There was also Frazier’s participation in one of the best rivalries in sports history with Muhammad Ali. As great as Ali was, he always had a mouth, and always trash talked his opponents and spoke freely on his political ideals. In the end, Frazier stayed humble and always respected Ali, none the less.
Furthermore, Frazier went through an actual struggle to become champion. He was Born in South Carolina to dirt farmers, and then moved north at 15 primarily depending on himself. At a young age he did his best to stay in shape while also working at a meatpacking shed in Philly. He even went to lengths like pounding on side of raw meat to stay in shape. Frazier always worked hard to take care of himself and didn’t believe in handouts or freebees.

In the movies, Rocky was practically displayed as a superhero, whose power was to bounce back after being on the brink of losing, so in many eyes that showed an honorable “toughness.”
Compared to the mighty Joe Frazier, Rocky doesn’t stand close. During the Olympics in 1964 he won a gold medal while fighting with a broken thumb.

Also, for as humble of a person as Frazier was, he never let the money or fame get to his head. He always gave back and even opened a small boxing gym in Northern Philadelphia. He lived in the apartment above the gym and was known by people around him as a straight-up guy that didn’t showboat. His gym meant everything to him and he didn’t want to be known as another rich man, but he wanted to give back. When his finances were shaky he did everything in his power to keep it open.

Why Rocky? Why is he the boxing icon Philadelphia, while Joe Frazier embodies everything we want in our champions? As great of a story Rocky is, people need to take into account that the story is really Frazier’s.

On November 25, the latest installment of the Rocky anthology, Creed, was released to commercial and critical success. Creed is already considered by some critics as the best Rocky movie since the original movie. It’s also the first movie to showcase Sylvester Stallone’s iconic Rocky Balboa in a different kind of role. He’s no longer the gritty, determined, underdog boxer willing to do whatever it takes to give his best and never give up in a fight. Instead, his job is to train Adonis Creed, the illegitimate son of Apollo Creed, as a boxer. Ever since Rocky III, a statue of the fictional Rocky Balboa has adorned Philadelphia – initially outside the Spectrum and currently at the bottom of the Philadelphia Art Museum steps.

In September, Philadelphia revealed a statue to pay its respects to Joe Frazier, a real former heavyweight boxing champion as opposed to the fictional Rocky Balboa. The statue was unveiled at Xifinity! Live of the city’s stadium complex.

There has been much controversy regarding these statues. Joe Frazier and Rocky Balboa, Rocky Balboa and Joe Frazier – one fictional, one an actual boxer. Shouldn’t a fictional character receive less recognition than a real life champion? Both were champions in their respective universes. Both are forever intertwined as icons, as movie costars (incidentally Joe Frazier had a cameo in Rocky) and as champions. But who is the true champion of Philadelphia?

Joe Frazier, originally from Beaufort, South Carolina, was a heavyweight champion best known for defeating arguably the most famous boxer of all, Muhammad Ali. He trained in Philadelphia and later opened a boxing gym in North Philadelphia, where he trained fighters after he retired from boxing. He was also a 1964 Olympic gold medal champion in boxing.
Frazier was a sensational boxer. He is the only boxer to come from Philadelphia to win an Olympic Gold Medal and the Heavyweight Championship in boxing. That being said, and no matter how Devonte spins it, he is no Rocky Balboa.

There is only one Italian Stallion and he is the true ambassador of grit, determination and Philadelphia. When one thinks of inspiration in Philadelphia, they rightfully think of Balboa instead of Frazier. Children who are athletes get inspired for athletic endeavors by watching Rocky movies not Joe Frazier fights. If you ask, people can name more of Rocky’s boxing opponents than Joe Frazier’s. It is the ‘never say die’ attitude that appeals to people everywhere. Whenever you think Rocky’s down for the count, he somehow manages to get back on his feet. It’s that resilience, that perseverance, that indomitable spirit that has made him one of the most beloved characters in movie history. There just isn’t that same connection or symbolism with Joe Frazier. Rocky embodies everything everyone wishes they were in life – even the actor who portrayed him. “I wish I was as tough as Rocky is, in my real life” Stallone said at the Creed press conference atop the Art Museum steps in November.

Philadelphia has a storied boxing history and many champion boxers so clearly being a champion in real life has nothing to do with it. People come to Philadelphia for Rocky not Frazier. He is as synonymous with Philadelphia as much as the cheesesteak, soft pretzel and Tastykake. People jog up the Philadelphia Museum of Art steps to the strains of “Gonna Fly Now” for Rocky. 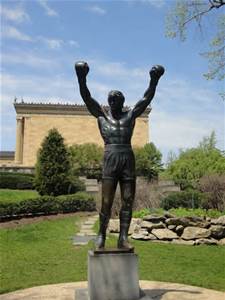 A champion is just a person lost in the scramble for his own gratification. He can be defeated. However, if someone becomes more than just a person, devoted to an ideal, and they are unstoppable, they become something else entirely – legend. That is the difference between Frazier and Rocky.

In this bout between the two, Rocky gives Frazier a TKO.