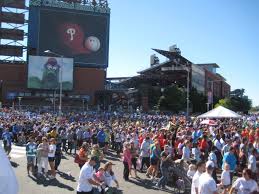 More than 15,000 walkers participated in the Walk Now for Autism Speaks Philadelphia on October 24, 2015 at Citizens Bank Park, including many from the Community College of Philadelphia.

To date, the event has raised more than $480,000 in support of Autism Speaks’ mission to fund research, increase awareness and family services, and advocate for individuals with autism and their families. For one student here at CCP, this issue hits home – my home. I’m a student at CCP. Inspired from my autistic brother, I chose a career path here at school as a psychology major with the intention of becoming an Applied Behavioral Analysis (ABA) and occupational therapist. My father, Philadelphia Police Officer Sammy Sanchez, is also an inspiration.

In light of recent events, on October 9, 2015, Officer Sanchez, his family hosted their second annual “Bowling for IPads” event. This event was started last year in the hopes of raising enough money to donate IPads to autistic support classrooms. The main goal of this event is to support and provide the autistic children in the city with iPads.

Officer Sanchez has seen the tremendous impact and benefit his own son has had with the new iPad technology, and decided it would be best to make a difference in other autistic children’s lives, as well. Officer Sanchez’s son, Sammy Jr., was diagnosed with autism at the age of two, back in 2007. Unfortunately, Sammy Jr. was not verbal for a few years after his diagnosis, which was frustrating for not only him, but also his family. He started receiving ABA therapy, one-on-one, in his home, beginning with his diagnosis and continues to today. The real breakthrough with his verbal communication didn’t occur until the iPad was introduced to him, though.

ABA therapy is a prominent tool used with those diagnosed with autism to improve and manage children’s behavior by achieving socially-important goals through rewarding and promoting positive behavior. ABA therapy also collectively tries to minimize the causes of problem behaviors and teach daily skills such as taking a shower, properly asking for help, learning to wait and take turns while playing games etc. This was a big step for the family, as the results became clear and the improvements tended on an upward spiral.

After the purchase of Sammy’s very own iPad, in addition to the special Proloquo2go software designed specifically for autistic children, Sammy has gone from 30-40% verbal to 75-80% over the last few years. As a result, Officer Sanchez, with the support and help of his family, now has the opportunity to help others get through it, as well. However, among the School District’s many financial struggles, the officer knew that if the schools were barely getting by with regular maintenance, there was no way they could provide these special kids with the tools they needed to have a better chance to succeed in school and grow to live the fullest productive lives that every child deserves.

2 thoughts on “My Brother Has Autism. Here’s How My Family is Making a Difference”