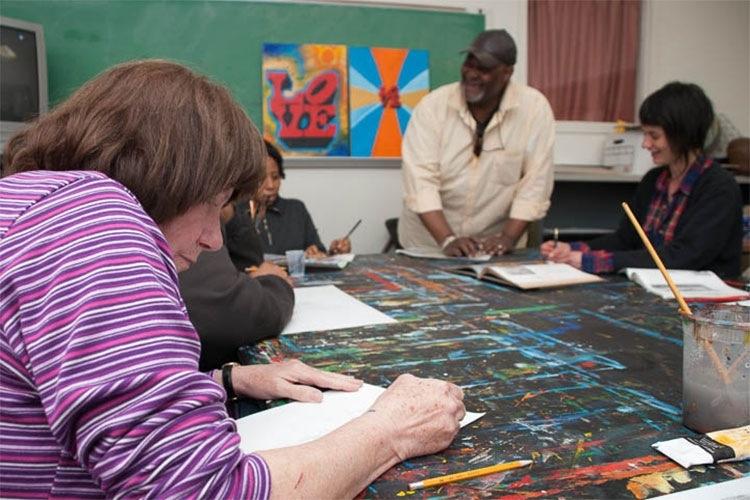 Imagine yourself sitting in a room with nothing but a single glass of water. From your chair you can look through the transparent glass and see that the water line sits exactly at the halfway point from top to bottom.

Now answer this question: Is this glass half full or is it half empty? This question has been used for years as a psychological tool to gain an understanding of how one views objects or even the world on a larger scale. There is no wrong answer, but if you said that the glass is half full, they say you’re an optimist.

Atlantic City, NJ-born James Webster Jr. is a glass half-full sort of guy. He has spent the majority of his life in Philadelphia where he has experienced every type of difficulty; from divorce, to depression, incarceration, alcoholism, and homelessness. Despite Webster’s tough upbringing in the 80s, he still had a love for art and was able to teach himself how to express those ideas and emotions that were swirling around inside him from day to day–and due to a local non-profit organization, he’s been able to hone his craft.

Webster has a reputation to have transformed window boards and ordinary objects in the streets of Philly into aesthetically pleasing pieces of artwork using ordinary household paint. Although he spent at least a year of his life homeless, he was still able to see things differently from how they were at the time. This ability allowed him to keep releasing his inspiration through paint and helped to transform his life onto a more positive path. He is now a housing resident due to the Philadelphia non-profit organization Project H.OM.E. and has been contributing to the Art Program there for close to ten years.

And while Project HOME offers a number of services and opportunities for individuals to learn skills, it’s the Art Program that has helped James Webster and many others in the city to make something beautiful out of their struggles.

When speaking to Rachel Ehrgood about the Art Program, she explained to me how it provides a safe place for individuals to be praised and accepted whether they are creating master works of art or simply using art as a way to be active. As Coordinator of the Art Program for the past two years, Ehrgood has been the most hands on person in the artistic coaching and development of Project HOME’s residents. She has a background in art as a teacher and painter, but she says that here “art is just the medium in which people are able to loosen up those holes that they have in their self consciousness.”

Once individuals gain confidence they often start opening up and communicating in other ways. A big part of the organization’s mission which Ehrgood helps to carry out, is to close the social margin between people who have experienced homelessness and people who have not. She says the biggest thing that you can do for a person who has experienced homelessness is to give them common courtesy. “Instead of asking what’s wrong with a person, ask what happened?” Every person is unique with their own personal experiences. You never know what happened in their past to cause them to be the person that they are now.

In a video on ProjectHome.Org, Founder Sister Mary Scullion and Rachel Ehrgood describe how self expression in art, music, and culture can help to bring people together. In efforts to break down social barriers, The Art Program has recently opened their doors and invited Drexel University students to work on a collaborative project in 2014. On Monday April 13th, 2015 they will be collaborating once again as Drexel University hosts the “Project HOME Artists for All Seasons Art Show” at their URBN Center.

This event will be featuring three recent alumnus and residents of Project HOME and a graduate of their Veteran’s Services program. Those who make it to this event can expect to see artists Andreas Walsh (Summer 2014), Gerald Halley (Fall 2014), Vincent Sangmiester (Winter 2014), and Adam Kerin (Spring 2015) showcasing their life’s experiences in the form of paint on canvas. The Program Coordinator invitingly says “It’s a wonderful experience to be able to share the human experience on a human level.”