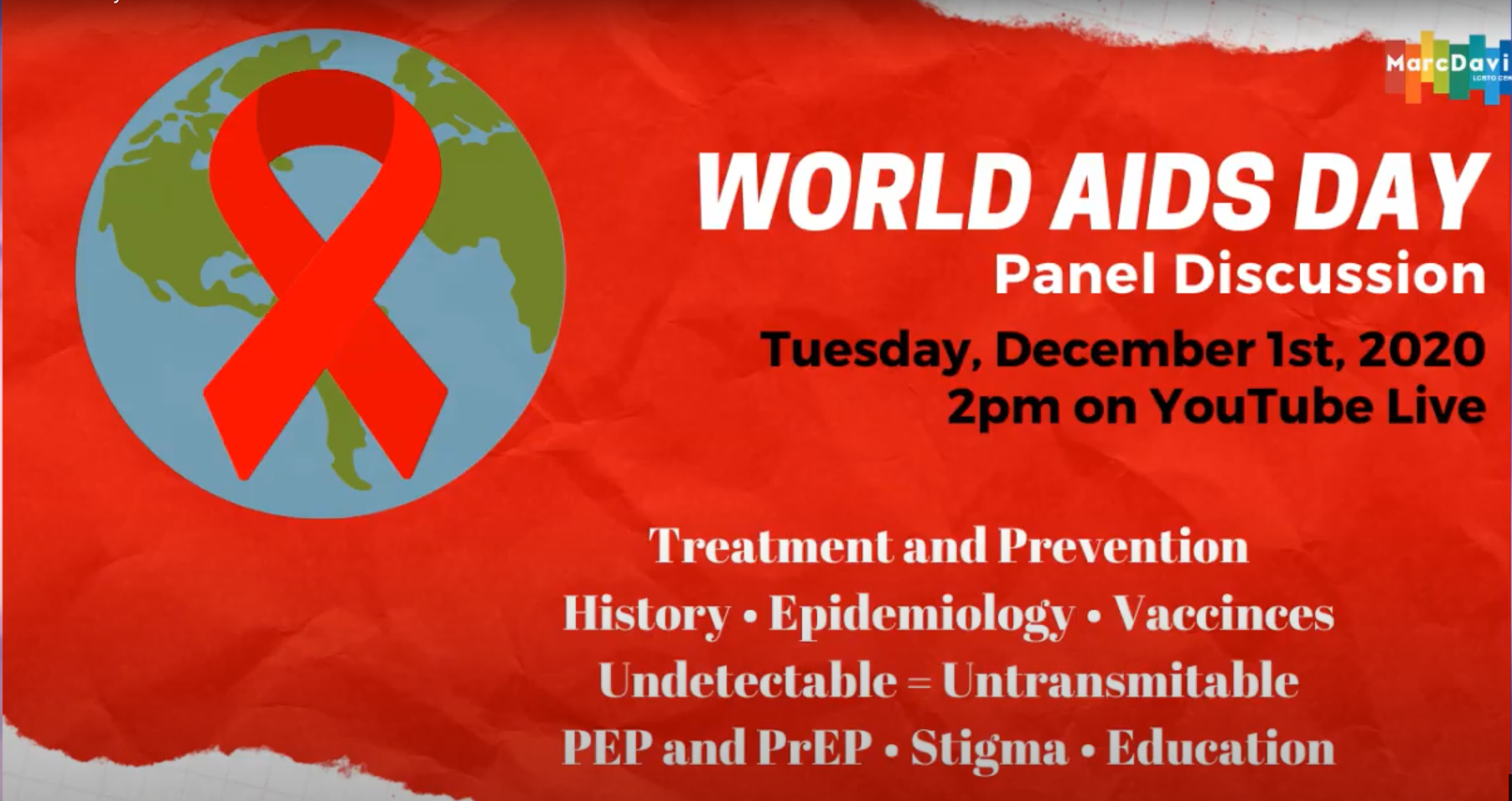 As the U.S. faces Covid-19, CCP’s MarcDavid LGBTQ Center reframed the HIV/AIDs crisis, which suffered detrimentally from negligence in the Oval Office.

“The main parallel,” Deja Lynn Alvarez, Director of community engagement at The Philadelphia Aids Consortium and World Healthcare Infrastructure, and the LGBTQ care coordinator for Department of Public Health, said during the presentation, “between Covid-19 and the AIDS epidemic is that it wasn’t taken seriously sooner because it primarily affected marginalized communities the most.”

CCP’s Vincent Scarfo, coordinator of the MarcDavid LGBTQ center went live with an educational panel on YouTube for World AIDS Day. The panel’s aim was to spread awareness about the advancements in HIV/AIDS treatment, expand educational urgency, and get people who are either seeking help or looking to help pointed in the right direction. Scarfo has been with the MarcDavid LGTBQ center since July of 2015.

“We always try to do something for World AIDS Day,” Scarfo said in an interview, “we want to highlight how far we’ve come.”

“It’s no longer an LGBTQ virus,” Alvarez said, “one of the highest risk populations is science deniers.”

In recent years, numbers have gone down for most populations. According to hiv.gov in 2018 the U.S. saw a seven percent decrease in HIV diagnoses.

The only population we see with increasing HIV infection,” said Scarfo, “is black females.”

This is something both agree could be assuaged with furthered education and funding.

“Part of what I do,” said Alvarez, “is work with the systems put in place to prevent people from getting access to these treatments.”

She described public health as an often-adversarial institution to the public. She said the fundamental operations of one public health institution to another is oppositional. Public health organizations are situated to compete for both clients and resources. Besides the poor infrastructure, there are still significant hang-ups regarding what could otherwise be life-changing.

Even with the advent of injectable treatments, the FDA, mired in politics, has been sluggish in making them widely accessible. And because the virus is believed to affect mainly marginalized groups, progress often falters.

People of color are at higher risk,” said Alvarez, “it’s not promiscuity or laziness—they are not given the same opportunities and respect that the rest of the populations are given.”

Alvarez was adamant that more hands-on-deck were needed.

One attendant asked what volunteers could do to get involved. Alvarez suggested getting online. A few easy search queries should help would-be volunteers orient themselves. There are many centers in the Philadelphia area that are HIV/AIDs which concentrate on different sub-groups: addicts, immigrants, LGBTQ, homeless, and different ethnic populations.

For those that missed it and want to watch it, the YouTube link can still be found at the pride portal, which Scarfo strongly requested be addressed in this article.

People, unfortunately, don’t check pride portal that often,” Scarfo said, “if they did, they’d see all of the great events happening on campus.”