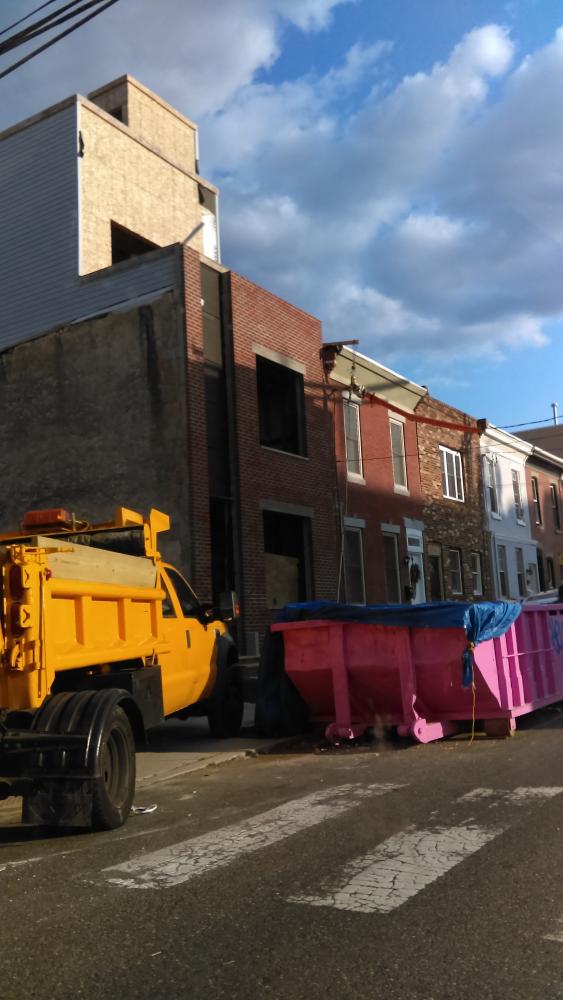 86-year-old South Philadelphia native Arnold P. paused, savoring an inhale of a cigar from Philly’s Old Twin Smoke Shoppe, “The building that used to be there was the Air Raid shelter.” he reminisced, “Can you believe what they’ve got up now?”

The soft wrinkle of his chin jutted forward, towards the shape of what looked to be a sleek, black mausoleum tacked between the sagging forms of two brownstones. A pretentious, boasting staircase sported sprays of exotic flower arrays and decadent Amazonian foliage. Windowpanes shouted political statements and Buicks buried their tires into the muted brown of a crumbling sidewalk, dotted with matted grey tufts of ‘grass’ where the evidence of an opioid crisis lay hidden. Yet on either side, humble, dry marble steps abided, for now. Joyously, Spanish floated like music notes from dusty windows, up and over the fluty yips of a college pong-match next door. Where the cousins and aunts, grandchildren and lifelong friends used to stay, now were the equally happy, yet ever-prodding eyes of a touristy set of millennial neighbors. Dogs and joggers. Joggers and dogs.

Arnold boasted his pile of enticing buyer quotas, which lay sun-bleached beside his crystal-ware ashtray from the 70’s. “WE BUY ANY HOUSE! IN ANY CONDITION!” He read. These days, there were makeshift poster boards tacked practically down each street; house selling: worth 150k, selling for 50k; a desperate call for cash.

It must’ve began after New York developers set their hawk eyes on the neighborhood that all of this…change came. Houses were torn, condos were built, and condos were sold before the Tyvek paper even went up.

Before, the old Taiwanese woman had her vegetables growing in the corner lot, and, for the ruddy background of slumping 20th century row-homes- some sporting the echo of a synagogue’s old star- the sight of a community greenspace was easy on the eyes. The lot had been excavated, the vegetables lost, all to make accommodation for 5 triplexes, deck and pool homes with the all newest cutting edge interior design and the dynamic freeform architecture of jutting blocks, soaring triangular bay windows and sharp, tasteless color combinations.

But this was revilization as they called it, right?

After all, the depressing browns and greys of the poverty line was really muting the jive of this area of the ‘Italian Market’…. right? Between the remaining modest brownstones and these 5 lumbering statements sat a long, gangly gate. This is a direct reflection of the class-segregation looming over the historical city of brother love.

Just on the other side of the feeding grounds of Passyunk Avenue’s quoted “Cheesesteak Corner”, sisters Jo and Lita watched as the promise of gentrification was fulfilled a half a block from their homes near 9th street area. Seemingly overnight (and constructed by the same minority labor force that seemed to align itself halfway across the spans of Philadelphia) a new duplex sprung from thin air. It’s a weasly craft; what seems to be paper-thin board walls and a spangle of TYVEK paper entombing a flimsy condo. This was a poor replacement for the modest yard hosting a spillage of grape-vines and crabapples that served as a childhood lore for generations. It was finally evident that the neighborhood serving as a buttress to the South Philadelphian way as finally buckled.

As the months passed, chain bars and gourmet coffee shops scrapped for retail corners where hard-working families held modest businesses; catering for their community which they’ve served for decades. The fabric of immigrant flags hung sun-bleached and dangling in the ghostly glass of abandon delicatessens. Businesses by the locals and for the locals were snatched up, gutted, and transformed into artisanal organic lime-pressing cleaners, or handmade soap boutiques. “These commodities, like bars, and boutiques…do not serve the existing community, and in fact, they drive out the existing community because the costs raise, and the neighbors are overwhelming and more property is demanded.” Maria states. How could they compete anyway? Artisanal communities demand their artisanal lifestyle, right?

“Say you were on tough times,” Arnold remembered, “You could take a roll down to Pat’s. There were 2 ways to load it up. You could say, give me 0.25 cents worth of meat and they’d stack it up.” This was a shard of memory from a time before tourists.

In other areas of Philadelphia, people are struggling to adapt to newly established tourist ‘districts’ and contemporary shopping prefectures. Maria states, “…areas are being categorized, which separates higher and lower income areas; then there are new people coming in modifying people’s businesses.”

Another blow as hard as a pop from Stallone was the fall of St. John’s church. This was not only a place of valiant worship, but this was a soul and center of people’s lives for generations. Families squatted here in the dark as the wailing sirens of air raid drills emptied the streets. Families, from all areas, came to mourn the same loss of community decades later, far after the sociopolitical turmoil reconnected segregated areas of the city. Mt. Sinai Hospital, another role player back even in the decades of the war now stands as a rubble filled lot, with cheap flimsy condos jumping up out of the gravel.

“We’ve sold the city like a cheap floosy,” says Mom, “we’ve sold our history, our stories, and our legacies.” A small stroll down Passyunk’s ‘Passegiata’ confirms all of the class inequalities and peddling of culture that comes with gentrification. A new storefront sports an all-too familiar logo of a demolished Passyunk Avenue landmark, whilst hosting an array of merchandise influenced off of South Philadelphian culture. Shirts lined for sale sported, ‘Jawn’, other merchandise explored the decades long controversy of Philadelphian philanthropy by sporting the logo of the Divine Lorraine. A certain t-shirt swung in the breeze, sporting the archetype of gentrification: A nice, longline top with ‘South Philly’ spelled out in bold as canvas totes boasted ‘Passyunk Avenue’ and the logo of the Native American Chieftain. Harmless, nonetheless an example.

We must conclude this: The families that exist here in South Philadelphia are a living history. They are a product of the baton handed from generation to generation- of loyalty, stability, and community. The streets they walk on and the ruddy bronze of trolley tracks can be nodded back to the labor their great grandfathers put in. Those abiding bakeries, butcheries, markets and side-streets are remnants of a very personal history in the lives of so many, and these churches ripped from their moorings in place for accommodation for the modern and avant-garde were the communal places where greats hid during air raid drills, where girl scouts and babies and cousins and sisters gathered for every success or tragedy in their communities.

Between all of these stories from the hearts of South Philadelphians, a common theme can be extracted:

What is there to do with all of the stories lifted from the hearts of the elder generation? We can learn, and chew on this 4 step formula to practice true revitalization in the South Philadelphian Communities:

And 5 for the lucky.

Together, as native South Philadelphians, we can create a different face of gentrification; where we, the community, and denizens from all over our mutual home of the United States can find comfort, opportunity and diversity within our always sunny Philadelphia.