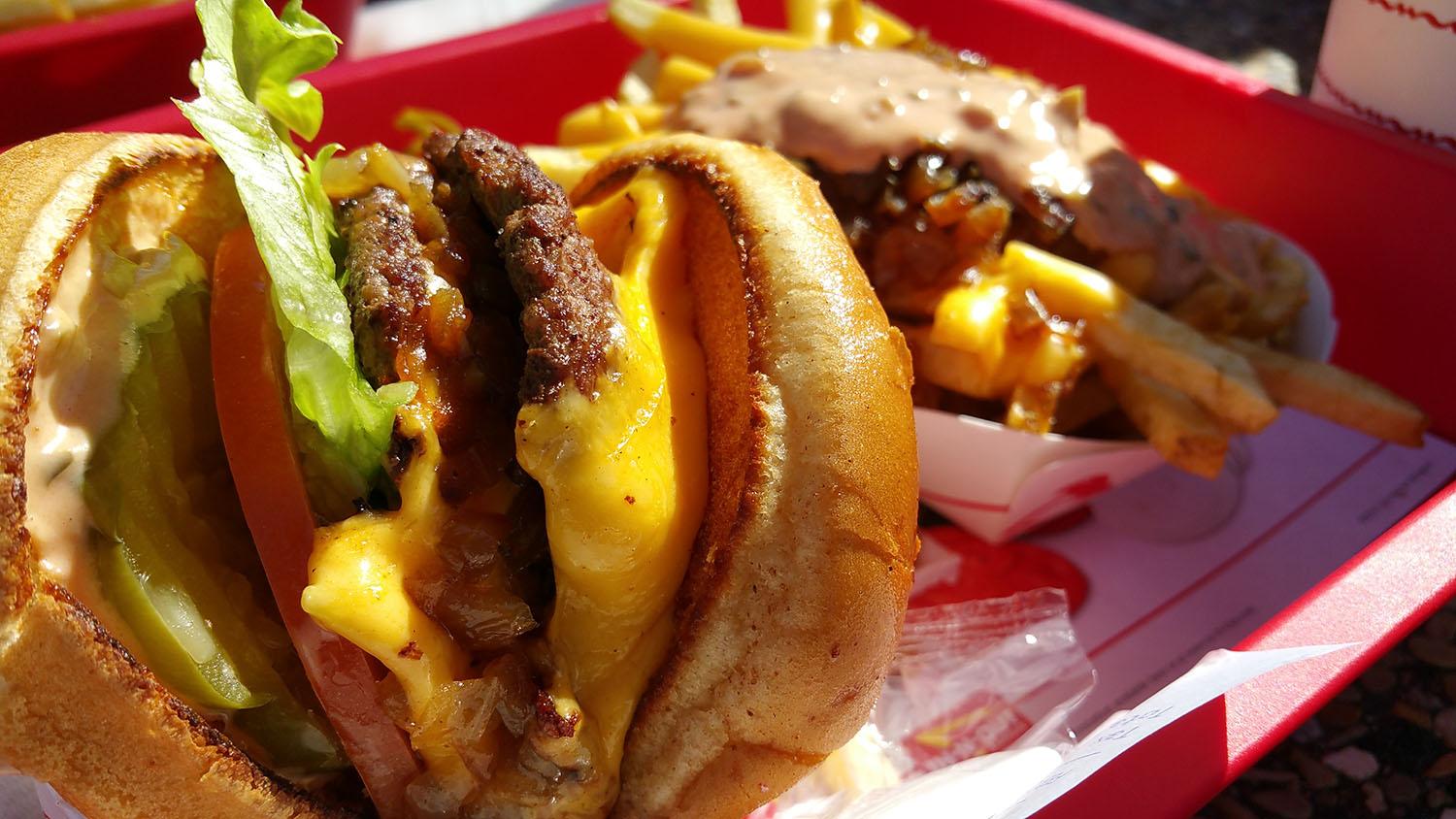 When it comes to food there is no denying that there are some big differences when it comes to the east coast vs west coast flavors. People come to Philly to get a cheesesteak, but out west it is necessary to get your hands on some In-N-Out Burger.

Yes, it’s fast food and absolutely addictive, but this is a burger worth being addicted to. I would happily die knowing it was the last burger I ever ate.

In-N-Out Burger’s menu can be ordered in a unique and fun way. You know how you can order a “steak wit’ whiz” in Philly and the person you’re ordering from knows exactly what you’re craving? In-N-Out Burger has a language of its own, as well.

Upon waiting in a long line in Los Angeles, I ordered a Double-Double with French Fries, both Animal Style and with Chopped Chilies. Now, for some of you that might not have ever heard of this, the menu comes standard with a single burger and with a single slice of cheese (hence it’s called a single-single). Back in the day a person could order as many burgers as they wanted until someone actually ordered a burger with too many patties and the company eventually discontinued that ridiculous option. Now a person can only order a burger with a patty as high as a 4×4, (four burgers with four slices of cheese).

At In-N-Out Burger the menu is small and only lists a few items, which seems lame at first, but you can also order from the “not-so-secret menu” that is not on display at the restaurant.  It can still be order from, provided you know what’s on it. A simple Google search can do the trick to keep you in-the-lope. I ordered my double-double animal style which is not on the menu but is a mustard cooked beef patty with hand-leafed lettuce, tomato, an added pickle and extra spread with grilled onions. The spread is a secret sauce, but don’t let that discomfort you because the burger is amazing. The chopped chilies get mixed into the burger leaving your mouth full of spice and other awesome combinations of what can be considered burger heaven.

For those of you that are not into the whole “let’s go to L.A. to get a burger” idea, no worries. There are still restaurants in the Philly with incredible options. One of my favorites in the city is the P.O.P.E Burger from P.O.P.E (Pub on Passyunk East). It’s an 8 oz. black angus beef patty with aged cheddar, a fried tomato, grilled red onion and basil mayo for $9.

The thing is almost too big to bite, but it is doable, nonetheless.  The burger’s home is a dive bar tucked away on East Passyunk Ave. in South Philly. That might sound horrible, but it’s far from it, because it is that good. The East Passyunk area has grown over the past few years and is home to an array of other astonishing restaurants, as well. You can spend a whole weekend there having fun.

Maybe you’re not into going that far south for a burger, that’s fine. Tavern on Broad, located at Walnut St. and S. Broad in Center City has a burger that is fair in price and easy enough to get to from CCP’s main campus, because it shares a corner with the Walnut-Locust train station on the Broad Street Line. The burger starts at $5 and then goes up in price depending upon what you add to it. I prefer to have my burgers medium-rare, and then I switch it up between Blue Cheese, Provolone, Mozzarella, Brie, and then add Jalapenos, Sauteed Onions, and Sauteed Mushrooms to it. The combinations are endless at Tavern on Broad. It’s a great burger if you’re looking for something in the Center City area. But, rumor has it that it get’s crazy-busy at night, because Tavern on Broad also has 1000 TV’s playing sports games from all over the country and from all kinds of teams. If that’s your thing, then do it, but if you’re strictly a burger fiend, like myself, go there for lunch and get a great deal on a burger. Their fries are also equally as amazing. Get those, too. You won’t regret it.

I’m sure there are an array of burgers from Philly I’m not mentioning here, but these are a few to get you burger lovers started. If you’re not a fan of burgers and want something more “ethical,” that’s cool.

When the Vanguard was in Hollywood we also had lunch at Sun Cafe. It was strictly organic and vegan. No cows were murdered in the making of these meals. I won’t lie. Vegan meals can be so good. I’m a huge fan of Portobello Sandwiches, aka nature’s burger. This sandwich came with kale on the side, too. I could hardly get to the kale, which was fresh, because the portobello sandwich was so filling. It comes with avocado, tomatoes, arugula, and cashew cheese. Cashew cheese! I didn’t know that was a thing until eating at Sun Café.

I’m still on the hunt for good cashew cheese in Philly, but let me tell you something: this sandwich was just as good as any burger. It also gave me enough energy to walk on the boardwalk of Venice Beach, instead of putting me in a food-coma like most burgers.

In the end, you’re going to want a burger that feeds your needs and these few suggestions are a good start. Whether you’re in L.A. or in Philly, there’s a special place with your ideal burger in every city.