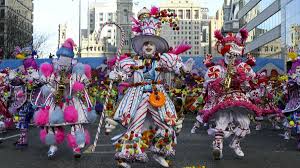 2016 started off as it has for the last 116 years in Philadelphia: with a cold-braving, rosy-cheeked Philadelphians eagerly crowding the sidewalks of Broad Street to catch a glimpse of Philly’s beloved Mummers. Mummers have been dazzling the city with confetti and over-the-top costumes since 1901, when nearly all members were of either Irish or Italian descent. More than a century of mummery proved that diversity in the parade was necessary to include all of the residents that make up the City of Brotherly Love.

The 2016 Mummer’s Parade sought to deliver more diversity than ever before. With this intention, the new Philadelphia Division, which included two new Hispanic groups, an African-American group, and an LGBT brigade premiered in 2016. The Philadelphia Division improved diversity of the Mummer’s Parade, as well as helping Philly save face after the bad reputation it earned in 2015. Somewhere between the slaughtering of the traveling robot, Hitchbot, and Mayor Nutter calling Donald Trump an “asshole”, Philadelphia faced several challenges in 2015.

This year’s Mummer’s Parade didn’t seem too out of the ordinary until the first majorly offensive brigade performed.

Sammar Strutters’ brigade, “Siesta Fiesta” shocked and shamed onlookers as they strutted down Broad Street with their faces painted brown, wearing ponchos and sombreros. To add further insult to injury, some of its members boldly wore taco costumes. Another culturally offense of performance included a brigade dressed as Asian warriors. Similar to “Siesta Fiesta,” members of this brigade were also dressed as fortune cookies. Furthermore, performers satirically ridiculed the “black lives matter” movement by wearing costumes with the words “Mummer’s Lives Matter” across their chest.

Just when we thought the Mummer’s Parade could not get any more offensive, the Finnegan New Year’s Brigade squashed that hope. A Mummer dressed up as a 1976 era Bruce Jenner led the brigade as Aerosmith’s “Dude Looks Like a Lady” blasted in the background. Behind “Bruce” is another member holding a then and now sign.  One side is of the Wheaties box cover from 1978 with Bruce Jenner in his Olympic uniform. Next to it, is  an image of a box of Froot Loops with Caitlyn’s face on it that says “now”.

Additionally, along the parade route, a member was televised shouting “F–k the gays.”

Later that afternoon, members of the Finnegan New Year’s Brigade assaulted a gay man who was walking his dog. A statement from Finnegan Brigade apologized for the member who shouted homophobic slurs, saying, “that’s not who we are or ever were.” Contrary to the statement, it seems as though the Finnegan New Year’s Brigade, along with a number of other Mummer’s brigades, are intolerant to groups who do not fit into their mold.

This cringe-worthy parade was not only a disappointing way to welcome 2016, but also brought on more negative publicity that Philly could have done without. It is also proof that we still have a long way to go as a country with so much diversity, yet still so much intolerance.

Philly’s new mayor, Jim Kenney, says that these performances were “hurtful to many Philadelphians. Our trans citizens do not deserve this type of satire or insult.”

Whether or not the organizers of these racist, homophobic performances set out to intentionally ridicule minorities, or if these actions all boil down to blind ignorance, Philly’s Mummers must learn from the shame that this year’s parade brought, and step into the 21st-century, where there is no room for intolerance and bigotry.