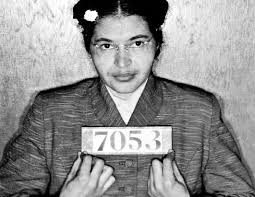 In 1955, at the conclusion of a long work day, an African American woman stepped on a bus in Montgomery, Alabama, sat down in an area designated for African Americans behind a sign that said “white,” in the seats five rows back from the driver where she was legally permitted to sit.
As the bus filled up, the seats reserved for whites filled up and if white people were standing, African Americans seated in the colored section of the bus were required to give up their seats. That rider knew what was coming next. “I need those seats,” the bus driver said. “It’s my constitutional right,” the rider said. Her protest fell on deaf ears and as such was dragged off the bus. Who was that rider?

Well, if you said Rosa Parks, you’d be incorrect. The rider was a 15-year-old high-school student named Claudette Colvin. She was the first. Only eight months before Rosa Parks, Claudette’s unplanned protest and ensuing arrest engrained the idea of Parks’ civil defiance into the minds of civil rights leaders. Claudette Colvin was a pregnant 15 year old at that time and the minds orchestrating the civil rights movement felt publicizing her case would not deliver the desired results of public opinion on their side. As such, they orchestrated, planned and developed the idea behind Rosa Parks’ protest. A committee chose between Parks and a few other ladies to what would be perceived by the rest of the country as a spontaneous objection to the racial segregation and kick start the Civil Rights movement.

Dec. 1, 1955, was the day Rosa Parks became an icon for equality (and the day everyone forgot about Ms. Colvin). On that date, Rosa Parks, the “Mother of the Modern Day Civil Rights Movement” refused to give up her bus seat to a white passenger. As a result, Parks was arrested because segregation on buses was legal in Montgomery, Alabama. Parks wasn’t the first to refuse to give up a seat, but her action led to the Montgomery bus boycott. In 1956, the Supreme Court ruled to ban segregation on public buses. As our country celebrates this iconic anniversary and the struggles everyone endured during the civil rights movement, let us remember what the struggle was for – equality, not exclusion.

The planning behind Parks’ “unplanned protest” was as organized, planned and secretive as the Manhattan Project. It is also not taught in schools. While Parks went on to be recognized as the “Mother of the Civil Rights Movement,” Colvin is merely a footnote and mostly unknown. And the rest, as they say, is history.

In a nonscientific poll conducted at CCP, not one person knew who Claudette Colvin, while 91% knew who Rosa Parks was.

That being said, in an age when African-American college students are fighting often microaggressive discrimination on college campuses across the country, 60 years ago, all Rosa Parks wanted to do was sit down on the bus among white people. An iconic anniversary – 60th anniversary-that should have received more pomp and circumstance than it actually did.

Ward Connerly is founder and the chairman of the American Civil Rights Institute, a national non-profit organization in opposition to racial and gender preferences. “When sister Rosa Parks was consigned to the back of the bus I doubt seriously that she considered that space to be a ‘safe space,’” Connerly said, “yet she bravely challenged the system. America is better for her courage.”

America has a clouded racial history but much has been done to level the playing field and attempt to fix the sins of its past over time. No other country in the history of the world has done more to rectify and assist citizens who are ethnic minorities than the United States of America. Often times, many people lose sight of that fact. The idea of the Civil Rights Movement was equality not priority.

“December 1st was the anniversary of her arrest, we should all be reminded of the circumstances that confronted her and how she reacted to them,” says Ward Connerly.