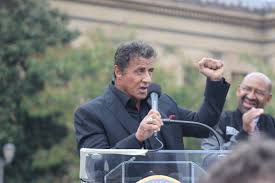 Those words are engrained into every Philadelphian’s mind as spoken by the city’s most iconic movie role – Rocky Balboa. The anthology of the fictional boxer has spanned nearly 40 years, with the first movie being released in 1976 and winning the Academy Award for Best Picture.
And on this Thanksgiving, Rocky is back – albeit in a different role.
Just several blocks from the main campus of the Community College of Philadelphia, Rocky ran up the Art Museum steps for the first time forty years ago. It was only fitting the press conference for the latest installment of the series, Creed, took place there on November 6. The Vanguard was in attendance for the event.

Creed chronicles the story of Adonis Creed, the son of opponent turned best friend of Rocky – Apollo Creed, and his journey into the world of boxing. The elder Creed was Rocky Balboa’s opponent in the first two films, trainer in the third, and tragically dies in the fourth. To foray into the boxing world, Adonis travels to Philadelphia in an attempt to persuade Rocky to train him to be the best boxer he can be.

The appeal of “Rocky Balboa” was that he was the ultimate underdog with an unparalleled persistence and resilience to never give up. No matter how high the odds were stacked against him, Rocky’s grit, determination and persistence led him to success. It was those characteristics that have made him one of the most beloved movie characters in history.

Creed is the next chapter in Rocky’s life and features a different cast of characters, but a story that fans will be accustomed to.
“The importance of dreams and the importance of family and how those two things relate to each other,” said writer/director Ryan Coogler at the press conference. “Ultimately, the folks that love you and respect you will always respect and help you achieve your goals.”

The movie is set to be released on Thanksgiving Day, the 40th anniversary of the first fight in the first Rocky movie.

Even though, on the surface, the Rocky movies are a story about boxing, the message behind all the Rocky movies is one the students at Community College of Philadelphia can learn from. As Stallone said, when pursuing your dreams, “it’s a matter of believing it and being reasonable with yourself and pushing yourself to the maximum of your abilities and that’s what this film is about.”

With the end of the fall semester near and finals approaching for all the students, there will be many tough times and obstacles. There will be challenges and tough tasks staring the students in the eyes. With the upcoming struggles, Stallone has a message: “All you kids in the audience out there, if you don’t think you can make it up these steps of life – which is kind of represented here by this museum – don’t believe that. If I can do it, you can do it.”